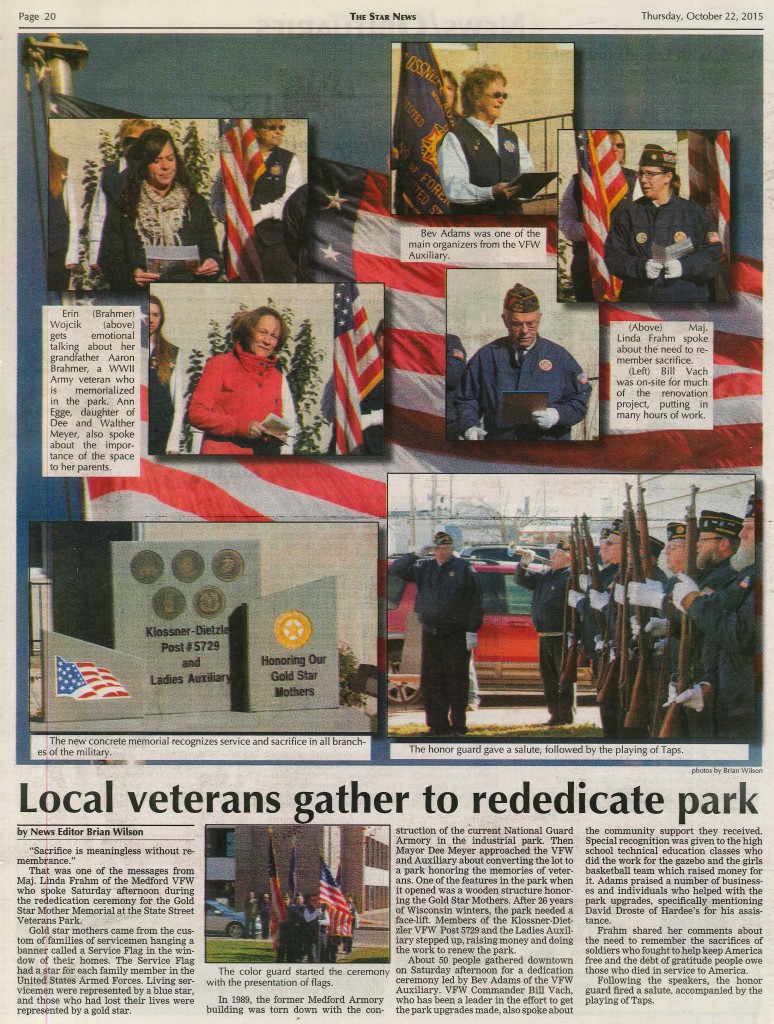 “Sacrifice is meaningless without remembrance.”

That was one of the messages from Maj. Linda Frahm of the Medford VFW who spoke Saturday afternoon during the re-dedication ceremony for the State Street Veterans Park.

In 1989, the former Medford Armory building was torn down with the construction of the current National Guard Armory in the industrial park. then Mayor Dee Meyer approached the VFW and Auxiliary about converting the lot to a park honoring the memories of veterans. One of the features in the park when it opened was a wooden structure honoring the Gold-star Mothers. After 26 years of Wisconsin winters, the park needed a face-lift. Members of the Klossner-Dietzler VFW Post 5729 and the Ladies Auxiliary stepped up, raising money and doing the work to renew the park.

About 50 people gathered downtown on Saturday afternoon for a dedication ceremony led by Bev Adams of the VFW Auxiliary. VFW Commander Bill Vach, who has been a leader in the effort to get the park upgrades made, also spoke about the community support the received. Special recognition was given to the high school technical education classed who did the work for the gazebo and the girls basketball team which raised money for it. Adams praised a number of businesses and individuals who helped with the park upgrades (Peterson Concrete donated concrete), specifically mentioning David Droste of Hardee’s for his assistance.

Frahm shared her comments about the need to remember the sacrifices of soldiers who fought to help keep America free and the debt of gratitude people owe those who died in service to America.

Following the speakers, the honor guard fired a salute, accompanied by the playing of Taps.