Michigan DOT Gives New Life to US 2 in Bessemer 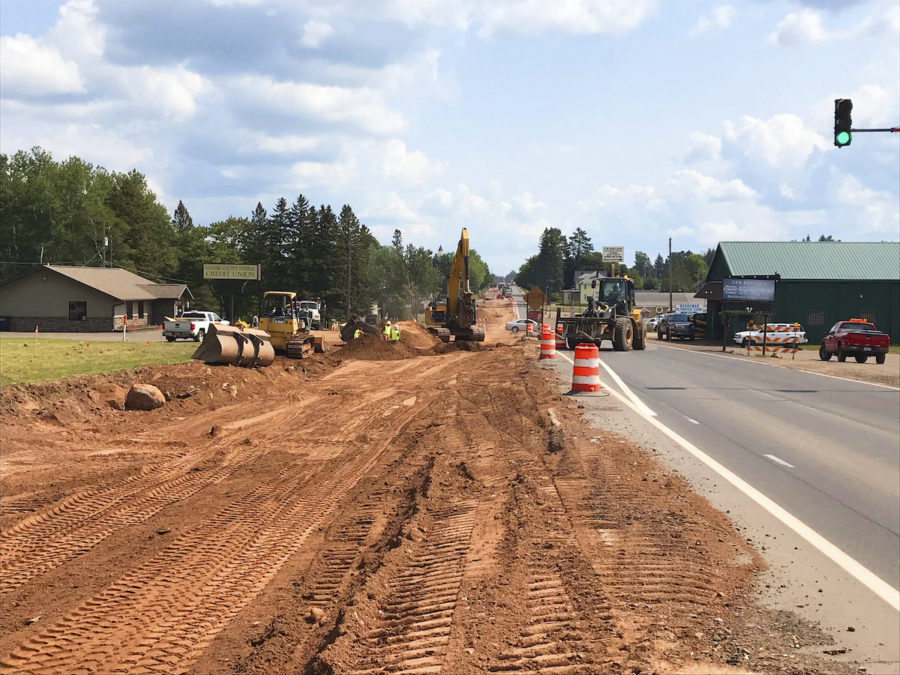 U.S. Highway 2 is an east-west route that runs along the northern United States. One of the towns U.S. 2 goes through is Bessemer, which is in the Upper Peninsula of Michigan, and just a few miles east of the Wisconsin state border. The Michigan Department of Transportation (MDOT) is the middle of a project that focuses on a 3-mile section of the route that runs through Bessemer.

In addition to being a major U.S. Highway, U.S. 2 is the main street that runs through the town of Bessemer, a town of approximately 1,800. The average daily traffic count of the stretch of road being worked on was 10,600 vehicles as of 2019. The traffic is 5 percent commercial, with the rest split between commuter and tourist traffic.

Because of the importance of the route, it’s particularly important that it be well-maintained. However, the road is aging and at the end of its service life. The old asphalt over concrete roadway was in poor condition, which contributed to the poor ride quality. The old infrastructure impeded traffic, resulting in slowdowns and costly maintenance. All this led MDOT to determine the need to repair this segment of U.S. 2.

Replacement from Top to Bottom

MDOT is doing a complete replacement of everything from sidewalk to sidewalk, including a new curb and gutter and the pavement.

During project planning, there was a recognition that the water main and storm sewer needed replacing. “We approached the city of Bessemer about replacing the water main and the sewer,” says Steve Cadeau, a Construction Engineer with MDOT, who is responsible for managing state and federal projects on the state trunkline roads. The city got a loan from the USDA and partnered with MDOT.

“We try to collaborate as much as we can with cities on urban reconstruction as it saves money and is more efficient,” says Dan Weingarten, a Communications Representative for MDOT.

The water main and sewer replacement will take place on city streets and U.S. 2. The work on the city streets is a separate contract and is not being handled by MDOT.

There’s a third element to this project with a separate contract. The city of Bessemer developed an independent third-party contract to replace the lead water service lines from the water main to the residences and business.

With multiple parties working on separate contracts that overlap, coordination is a must. “The multiple parties have weekly construction progress meetings, and the contractors update each other to know where they are in their progress,” Cadeau says. “We have been able to coordinate, so everyone can get their work done.”

Throughout the project, MDOT has kept U.S. 2 open to traffic. However, there will be a three-week period where they will close all lanes on the roadway and detour traffic. At this time, the team will need to excavate a sewer line that is buried 20 feet below ground. The 105-foot-long segment of sewer line crosses under U.S. 2.

At the west end of the project, there’s a hill that interferes with the visibility for traffic entering the roadway. To improve sight lines, the team made a 5.5-foot cut in the grade. The length of the road where the elevation was lowered was 1,500 feet. “By bringing the elevation down, site distance to the east and west was greatly improved,” Cadeau says.

While doing this work, the team had safety concerns. To ensure a safe zone for workers and motorists, the team created a buffer between the two. If an incident occurred and a car departed from its lane, there was a safe slope to minimize injuries and damage. Traffic was also sent to the south side while the team worked on the north side and was flipped once the first side was completed.

The lanes in a portion of the project area are being reconfigured, going from four lanes to three. The middle lane will be a dedicated left-turn lane. This “road diet” is expected to help with safety as it will reduce conflicts and enable drivers to turn off the highway without someone behind them trying to get past.

With three lanes instead of four, the road has a smaller footprint. This is allowing for some aesthetic upgrades, such as wider sidewalks and the installation of green space.

Another safety enhancement in the area is the widening of a main intersection. When trucks entered U.S. 2 at Moore Street, they often had to make a wide turn and go to the inside lane. Also, there was little room for them to maneuver, and the curb and gutter at the intersection were getting banged up. The enlarged turning radius should alleviate the issue.

The project began in June 2021 and is scheduled for completion in October. However, the team is slightly ahead of schedule. Cadeau credits the weekly meetings and James Peterson and Sons’, the contractor on the project, ability to think ahead and keep everyone moving.

In addition, the team was able to complete an extra block before shutting down for the winter. The need to do so was related to a water main. If the team stopped where they planned to, the circulation of water in the pipe would have been impacted. By going an extra block, they were able to get the pipe connected.

Cadeau recognizes that this extra work happened because James Peterson and Sons could do the work. Regarding the contractor, Cadeau says, “We have a great working relationship. The project manager is forward-thinking as he looks ahead in the schedule and brings up any potential issues, which is very helpful as it keeps everything moving along smoothly.”

The budget for the project is $9.9 million. The city is contributing $1.8 million, while the rest is an 80/20 split between the federal and state governments. Although there have been a few project increases – such as extra asphalt to push traffic further north away from the excavation area – the team has also found some savings, such as replacing some existing concrete pavement with hot-mixed asphalt. Therefore, the project is on budget.

When the U.S. 2 project is complete, commuters will have a new road surface and improved safety. MDOT will no longer need to be regularly patching the road. This section of U.S. 2 will be open for cross-country travel.